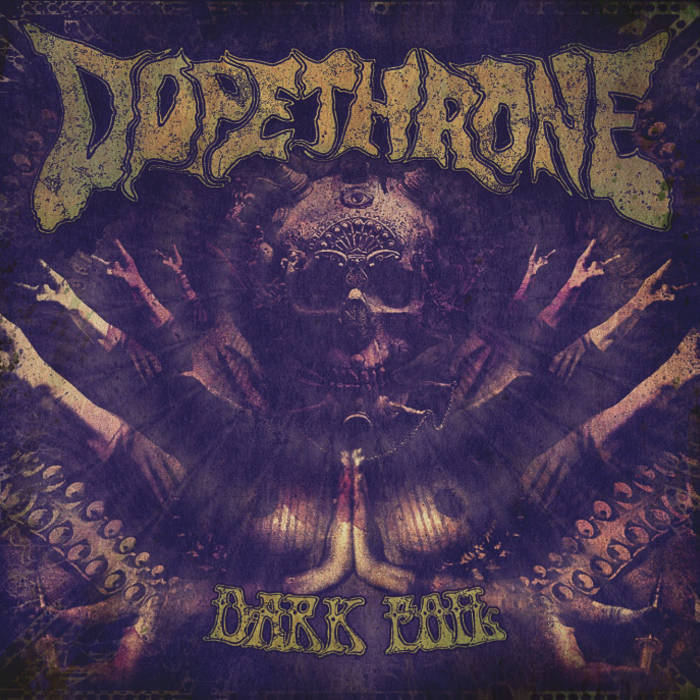 dakdak50 I gave 5 bucks for this and regret not giving more. This album is a fucking planet cracker. A must buy. Favorite track: Dark Foil.

kvltspookster666 If you enjoy sludge, but aren't on the Dopethrone hype train, you might as well just cut your dick off Favorite track: Zombi Powder (feat. Julie).
more...

"Besides the most heavy album on the planet this is also a three-headed underground D.I.Y. sludge beast from Montreal, Canada."
-STONEROBIXXX

"Their debut was already huge and powerful, but this one is litterally the sound of a black planet of tar falling into your head. They take the cue from Electric Wizard, Eyehategod, Fistula, Buzzov*en, Grief, Iron Monkey, Coffins and all the major names in the cult of big, bleak, evil, slow, uncompromising sludge. The riffs are slow, thick, punishing, suffocating and destructive. The vocals are harsh, visceral and animal-like. And the mood is heavy, oppressive and amazing."
-SLUDGE SWAMP

"Writhing, slow, pulsating grooves running through the veins of Satan, Dopethrone encompass the bleakness of black metal, the steadfastness of New Orleans-style sludge, and a heavier-than-thou doom mentality. The demonic vocals eat at your eardrums like a ton of maggots while the groove penetrates your brain. Check out their unique take on the Bill Withers classic "Ain't No Sunshine". Truly amazing!"
-HEAVY PLANET

"The riff comes in many forms. Sometimes it’s clean, catchy and elegant. Sometimes it’s filthy, grimy and about as elegant as a sledgehammer to the sternum. Dopethrone is the latter.
This three piece group from Montreal play some of the filthiest, skull crushingest, downright face smashing riffs I’ve heard in a long time. Dopethrone’s brand of sludge is like having your entire body slowly crushed in a vice. It’s not going to be fast, it’s going to be long and slow with a never ceasing pressure. This is the kind of sludge that just holds you in your chair, not only are you too scared to move, you can’t move. Sticking to the tried and tested molasses slow pace, Dopethrone hammer you with riffage so drenched in distortion and fuzz, it might not even be human any more. Combined with the guttural groans from vocalist Vincent and the mixing of some truly creepy samples, it’s one hell of a trip.
-CHURCH OF THE RIFF

"DOPETHRONE brought doom to a new high with the release of Dark Foil. Every time I put this record on, I run for the bong. This album is the perfect soundtrack to my mental elevation! DOPETHRONE’s music has all of the right ingredients: the bones of Sabbath, the filth of crust and the whiskey breath of Motörhead. The way that this album is mixed is perfect – it’s dirty as the gutter but clear as a sunny day, and it has the sickest apocalyptic vibe throughout! DOPETHRONE’s music has a dark energy that lives within every note they play, and there is something weirdly uplifting about Dark Foil. DOPETHRONE dipped all of their baselines in the sweetest Mary Jane resin, and then cured all of their riffs for maximum death of braincells. The vocalist for this band is on some next shit, you can hear the hash oil dripping off of every fucking word that he spews. How did these Canadians get so fucking groovy?
This is one of those bands that will have the crusty punks head banging right next to the stoners, both united under the bad sign of doom."
-CVLT NATION

"Brazenly heavy, and unapologetically evil sounding, almost everything about this album kicks major ass. I guess I'll just start with the basics. Dark Foil is a rather simple album that works to salvage something atmospherically higher (huh, huh). Right from the very beginning of the album, when the film sample plays and the distorted groove of the first song kicks in, a chill will creep up your spine, moving up your neck, possessing you to bang you head in compliance with Satan. Basically, this album sounds fucking evil! As much as I dig the greats such as Eyehategod, Sourvein, Grief, etc., and their misanthropic spin they engrain in the sloppy grooves of sludge, I can't help but blow a big fan-boy load in my pants, in regards to the overall "smoke weed, and worship Satan" sound that these guys create on this album. Various psychedelic solos like the one that can be found in the albums longest, and easily most groovy song "Zombi Powder," add a taste of ambiguity as they pull you through the song, which basically sounds like some trance-inducing mind-spell.
As far as the music goes, the band held very true to the genre of sludge and stoner metal alike. Crushingly slow and groovy riffs pave the way for the album while slowing down at points to display the more psychedelic aspect via guitar solo. The vocals are where the album gets a lot of it's evil sound and are rather reminiscent of black metal vocals. The slowed-down, drawn-out pacing of the album allows for some very epic, lasting screams. My ears were very pleased.
The production of the album is damn-near flawless. Everything sounds very crisp and clean on the recording. Some people can't get into this as much. They prefer the sloppy, "recorded in a basement" quality. I can't stress enough how much the production helps amplify the overall tone of the album. You can hear every groove, feel every distorted strum, and become engrossed completely in the album. The overall atmosphere thrives and lives through the production on this album. It sounds like Satan himself wrote it, and shit it out unto Earth.
Score: 9/10"
-CELESTIAL NOCTURNEM

"By blending unpainted and icy black metal bleakness (think Nachtmystium) with New Orleans sludge inspired grooves (Down, EHG, etc...) and growls from the crypt (like Carcass’), Dopethrone has found its sound: a rotten, doomed, mean and groovy one. They will blow your head right off with this six-song, ten-ton assault, clocking in at 44 minutes. This trip includes lots of booze, weed, demons, needles, zombies, some fine horror movie samples and even a bunch of creepy backwards singing monks! The heavier-than-thou trio could very well be Montreal’s next metal export down south."
-KRISTOF G. (BANGBANG, HOUR)

Mastered in March 2011 by Jean-Baptiste Joubaud.

Music and lyrics composed by Vincent Houde.
Except for "Ain't no sunshine" originally composed by Bill Withers.

Bandcamp Daily  your guide to the world of Bandcamp